Limitations in the management of aortic graft infe - 1/3/2005 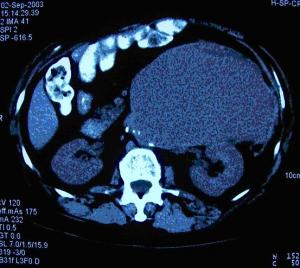 The patient was transferred to a French hospital for evaluation, for a possible surgical management of the infected aortic graft with an arterial allograft. The operation was performed in late December 2002 with success. The infected part of the aorta, including the graft was removed, wide surgical debridement was performed and a cryopreserved allograft was transplanted. The operative findings included infiltration of the wall of the duodenum by the infectious process. She did not receive any immunosuppressive therapy for the allograft.
For the next three months the patient remained symptom-free but afterwards she was admitted to the hospital for investigation of abdominal pain, diarrhea and vomiting of two-day duration. After several diagnostic exams she was discharged with the diagnosis of cured gastroenteritis with suggestion for bimonthly follow up, due to her past medical history. The patient was non-compliant to the medical suggestions and presented to us six months later with left lower abdominal quadrant pain. Palpation of the area revealed a big, tender, pulsating mass. An emergent CT scan was performed (Figure). The patient died out of ruptured aortic aneurysm a few minutes after the CT scan was performed. The clips from the last operation, as seen on CT scan, indicated that the aneurysm originated at the anastomosis of the allograft. 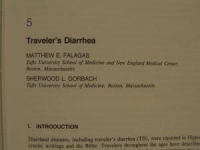 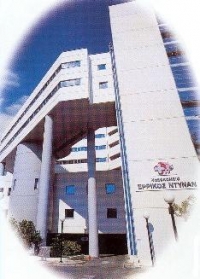